Happy Holidays to all my friends, followers and readers

Posted by Barbara Sala at 18:57 No comments: 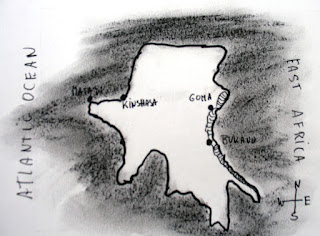 This is an excerpt from the book INSECTUAL, page 51 :

The map of Congo-Kinshasa called the Democratic Republic of Congo (DRC), one and a half times the size of Europe and 77 times the size of Belgium, reminds me of a rectangular head with a long snout dipping into the Atlantic Ocean. The back of the “neck” is the copper-rich Southeastern province of Shaba and running down half the back of the head is a luminous blue braid. This is the region of the great lakes starting with Lake Victoria to the north in Uganda and running down through Lake Albert, Lake Edward and Lake Kivu to Lake Tanganyika in the south. The top of the head is bordered by Uganda, Sudan and the Central African Republic. The big green area covering at least one half of the whole country resembles a brain. This is the tropical forest, one of the world’s great sources of oxygen. The DRC is the heart and lungs of Africa.
The high forehead is bordered by Cameroon and the Republic of the Congo (Congo-Brazzaville). The snout, running toward the Atlantic Ocean, squeezes itself between a rocky cliff into the delta that forms the DRC’S narrow 25-kilometre-long coastline. Three cities, like three jewels, are crammed into this delta. One of these jewels is Matadi.
We were on our way back from our weekend-long local honeymoon at the small beach resort of Moanda on the shores of the Atlantic. At Matadi, our car climbed the asphalted highway that cuts through the rocky escarpment. This road is one of the most travelled in the whole DRC, bringing goods to Kinshasa, since the Congo River between Matadi and Kinshasa cannot be navigated because of its many cataracts. Reaching the top of this escarpment, we stopped to take in the tremendous view over the harbour and the narrow delta. Ocean steamers and cargo boats of all sizes were coming and going. To our left lay Angola with its rich oil fields and facing us was Congo-Brazzaville.
FREE: You can read the first 24 pages of INSECTUAL for free. www.booklocker.com/7890

Posted by Barbara Sala at 16:39 No comments: