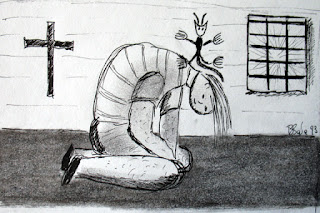 
Where is this sorrow coming from? She is on her knees, but she is not praying. She seems to be imprisoned (see the window) and some weird creature is having fun in bouncing on and off her neck. “Deliver me of this four legged creature” she might be thinking, but she doesn’t do anything about it.  It looks like an insect, a spider, a clown with horns. What do you see?  If you turn the page a little, her position also resembles a brain. Definitely she is wailing in deep deep sorrow.


To say this book is totally unlike anything I’ve ever read before would be an understatement.  I’m not sure how to even describe this book as SO much happens, and it seems to touch on so many elements, themes, and subjects, times and places. It is told in a stream-of consciousness manner mostly recounting past events (but told in present tense…). I think that you need to take your time while reading it to really grasp everything the author is saying, as it will require some deeper thought and reasoning. Gets pretty dark and twisted, and definitely for a mature audience only. But overall a very interesting, different type of book that is memorable, moving, and very well-written. (4-5 stars).

Posted by Barbara Sala at 21:55 No comments:

Review of Insectual by Elaine Audet 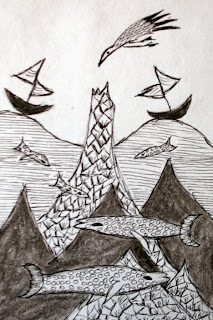 "You are scared of Love"

You are scared of Love

She realizes that her unconscious world is completely unknown and only a small part, just as big as the tip of an iceberg, is consciously known to her. Her memory doesn't give her any answers to her questioning, so she decides that with the tool which is this therapy, she will put aside the present and investigate the origin of the bothersome feelings.  The journey might be tumultuous, see the agitated waves in the drawing.


I discovered the painter Barbara Sala about 12 years ago in the Musée International d’Art Naïf de Magog in Quebec which owns a few of her paintings in its collection. Dazzled by her colours and marvellous Chagallian  phantasy, I decided to meet her. At that time, I read her first children’s book “Celestine and the Magical Geranium”, written and illustrated by herself and which I praised in my article.(1) At our first meeting, this very intense woman told me about her diary of psychotherapy, which she had written 20 years earlier. Her life is a kind of obstacle race, a descent into the hell of incest, profoundly forgotten in her conscious mind since her German childhood during WWII.

In 2015, INSECTUAL - The Secret of the Black Butterfly is published, with 75  drawings by the author. Extremely well written, this passionate journey through the narrow tunnel of blocked memory oscillates between the spiritual quest and a psychological thriller. Her heroine Maya’s life is anything but trivial. From Nazi Germany to the civil war in the ex-Belgian Congo, where she worked for the United Nations in the ’60s, until her arrival in Montreal in 1974, she lived a perpetual adventure, and married a handsome Italian with whom she had a boy and a girl. As I would do for a thriller, I will not reveal here the details of her difficult journey through her past, since she was careful to keep the suspense until the end.

Everybody interested in the process of psychotherapy will learn a great deal, as much about the blessings as about the risks of entrusting the direction of one's life to another person to challenge the painful secrets of the unconscious – even if that person is a member of the Order of Psychiatrists. In a fluid, colourful language, always with a truly authentic voice, Barbara knows how to interest us about her heroine’s struggle to regain her sexuality and her personal autonomy. Over a period of 30 years, she imposes on herself this quest for truth. Her growing commitment in the visual arts and writing - parallel to her therapy - favours the recovery of her independence, often put aside in the name of a harmonious family life and the safeguarding of her marriage.

The journey of this courageous septuagenarian shows the depth of the wounds left by incest, this absolute patriarchal power imposed upon her heroine Maya in childhood, from which it is almost impossible to liberate oneself totally. The guilt and the fear of rejection trap her unconsciously to give in to seduction, that illusory power that her predator has already cynically imposed on her during her adolescence in the name of love.

The means to overcome her daemon

Along the way, we are learning that the displacement of a simple “s” and a simple “c” in the words “insect” and “incest” illustrates tragically the hidden plot in her life. “In my mind I was always searching for the lost link of understanding, which would perhaps mean the release of the “devil” (page 70). This elusive daemon, this “Black Butterfly” is named in one chapter “Lord Phallus.” (page 174).

In Maya’s difficult psychological journey a journal is of prime importance. ”I want my diary to represent the absolute truth, to record as closely as possible what was said, even if it is shameful, embarrassing, unspeakable.” (page 152). In staying true to this principle and in letting her imagination flow freely - in her art - she reaches another level of consciousness thus allowing all hope to flourish.

Born in 1937 in Darmstadt, Germany, Barbara Sala grew up in the Bavarian Alps. In 1974 she emigrated to Canada and settled in Montreal, after having lived in Switzerland, England, Thailand, Congo (Zaire) Dominican Republic and in Guyana. Since 1987 she participated in more than 50 group exhibitions and 10 SOLO exhibitions in Quebec, United States, France, Switzerland and Tunisia. She obtained three prizes in Quebec.

Posted by Barbara Sala at 14:30 No comments: